This document explains how WICS intends to fulfil its remit and statutory responsibilities during the regulatory control period 2021-27.

This document may not be fully accessible

As part of the process for planning the next regulatory control period, we are required to provide an indicative budget of the expenditure needed to achieve our objectives as agreed by the Scottish Government.

Agreeing the budget for a full regulatory control period provides Scottish Water and the licensed providers with a degree of certainty over future fees and our ability to achieve on the objectives outlined in this plan.

We agreed a budget of £21.8m for the current six year regulatory control period, of which just over half related to anticipated remuneration costs, 27% to consultancy costs and the remaining amount to other operational costs, such as office accommodation, information technology and recruitment. We estimate that we will have incurred in the region of £21.0m by the end of the period, which is 3.6% below the agreed budget. Included in this estimate is the absorption of a significant increase in employer pension contributions from 1 April 2018, which in itself cost over £300,000.

We have received a considerable contribution to our net income (£0.8m) from the provision of external services to Open Water Market Ltd in relation to the development of the retail market in England and from our international activities, predominantly European Commission funded work with the Romanian regulator. 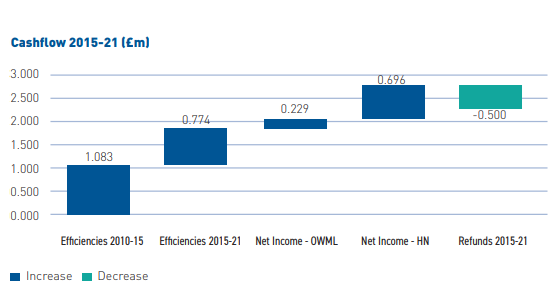 We began the regulatory control period with a cash balance of £1.2m (£1.083m from efficiencies made in the regulatory period 2010-15 and £0.138m net income from OWML). During the current regulatory control period we repaid £0.25m each to Scottish Water and the licensed providers. Notwithstanding having already repaid £0.5m, we are currently forecasting a cash balance at the end of the current financial year of £2.282m. In agreement with Scottish Ministers through this Corporate Plan, we will agree a suitable method of repayment of a further £1.3m of the estimated cash balance at 31 March 2021. We outline our repayment proposal at the end of this section.

The table below outlines the proposed income, high level categories of expenditure and the anticipated cashflow over the regulatory period.

Under these proposals, our income and expenditure are projected to be in balance in the final year of the coming regulatory control period.

This is possible because we are committed to achieving a contribution (income less any direct costs incurred) in the region of £1.3m from international projects.

Our revised regulatory approach under EBR, as set out earlier in this document, will inevitably require more regular and more detailed interaction with Scottish Water. EBR is based on open, transparent and regular information sharing, along with higher quality reporting of appraisals, performance and progress.

We have also identified a number of major projects that will require more resource on an on-going basis. These relate to issues such as wholesale cost allocation for tariffs, monetisation of externalities and accounting separation of licensed providers’ activities in Scotland and in England (where markedly different rules apply).

Following a successful recruitment campaign in September 2020, we have hired four trainee analytical employees. We hope to fill another four trainee analyst vacancies, bringing the total number by the end of the regulatory period to 12 analysts (including trainees) at any one time. This increase in headcount and associated remuneration costs will also allow us to respond both to the additional project oriented works foreseen under EBR and also more flexibly to income earning Hydro Nation projects as and when these become available to us.

During the early part of the next regulatory control period, the Deputy CEO plans to retire. Experience tells us that it is very challenging to appoint at such a senior level from outside, albeit we continue to remain open to this option if there are indications this has changed. As part of our succession planning, we have been investing in our cohort of Assistant Directors and expect to see them graduate to more senior roles, taking on further responsibilities around the time when the Deputy CEO retires.

As part of the assumptions used in proposing our remuneration costs for the next regulatory control period, we have allowed for salary increases to include progression in line with our performance management framework and for a basic award which will be based on the guidance outlined in the annual Scottish Government’s Pay Policy.

The underlying salary budget is increasing at 3.6% a year in real terms over the 2021-27 regulatory control period. Adjusted for headcount, it implies a 1.3% real increase in average annual remuneration, including the costs of promotions.

As explained earlier, the Commission requires access to sound advice relating to the economics, legal, finance, accounting and engineering of water and sewerage provision in Scotland.

The Commission’s role is similar to that of other regulators in the UK, but it does not enjoy the same potential for economies of scope or scale. Even these much larger regulators with their additional scope and scale advantages make significant use of external consultants. Expert, independent advice not only provides expertise in areas – such as legal advice and HR – that are not core skills of the office but can also carry additional weight with stakeholders and can be more robust to challenge than expertise drawn from within a regulator’s own office.

Operating costs include all costs that do not relate to salary or consultancy. These are now fully consistent with the business case for allowing the lease on our offices at Moray House to be transferred. As such, it includes the costs associated with home working for the next two years followed by the potential costs of a move to a new base, should this be considered to be desirable.

The Commission has no planned capital expenditure over the period, other than routine replacement of IT equipment.

Any income and expenditure related to business development or funded international work will be ring-fenced in an appropriate way, to allow for full scrutiny of activity in this area.

The office of the Commission will provide all the resources required to perform international work, including staff time, travel and accommodation requirements and sourcing any external consultancy required.

Any direct disbursements will be allocated to the international ‘division’ and staff deployed on international work will be charged to the division at a charge-out rate which will cover full remuneration costs of the employees involved. To this end, we will deploy an effective time-allocation mechanism to ensure any time spent on international activities is captured.

The level of activity in this developing area is difficult to forecast but we have made our best estimate at the volume of funded international work we will be able to achieve during the regulatory period and the level of business development activities required to achieve this.

We will bill based on time-spent and any direct costs will be directly re-charged. The aim would be for the international activities to make a contribution to overheads during this regulatory control period of up to £1.3m.

This contribution will be after the subtraction of all direct disbursements related to international activity. Any surplus in excess of the planned contribution, which arises from international work will either be returned to Scottish Water or licensed providers or may, in part, be used to support other Scottish Government Hydro Nation initiatives. The Commission will alert the Scottish Government to any such surplus.

We propose that the Commission should maintain its ability to transfer budgets between budget lines and between financial years.

A formal review of the budget will be carried out after the third year of the regulatory period for submission to the Scottish Government.

The Commission operates under a tight budget constraint adhering to formal financial processes and procedures. We expect to meet all foreseeable costs from the budget outlined in this Plan. However, if there were substantial legal proceedings, there would need to be a separate provision.

As a result of our careful management of customers’ money and the income that we have generated from our hydro-nation activities during the current regulatory period, we propose the following use of our projected year end surplus as at March 2021:

The allocations for Hydro Nation research projects and network building will contribute to the wider development of the Hydro Nation initiative, and therefore to the scope for future income for the office from this source. Future income from the office’s Hydro Nation activities will help offset future levy costs and hence ultimately benefit customers.